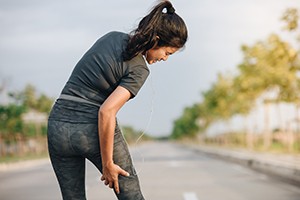 Dr. Stickney, a Kirkland orthopedic surgeon, is an expert in sports medicine, hamstring injuries, exercise and health, and more.

Hamstring injuries are a common, and often frustratingly persistent, source of limitation for both elite athletes and weekend warriors. These injuries can involve either the muscle belly or the tendinous attachment of the muscle to bone. The hamstring is one of the longest muscle bellies in the body as it stretches from the pelvis to the tibia spanning the hip and the knee. Hamstring tears, knee muscle tears and related injuries make up nearly 30% of all lower extremity muscle tendon injuries. These injuries are commonly sustained while running particularly with running uphill. They are very common in soccer, football and all sports associated with acceleration or kicking. Hamstring injuries also are common in weightlifting, skating, or water-skiing. This can be the result of a rapid uncontrolled Hip Flexion with knee extension. If the injury is associated with a loud pop that often signifies a tendon avulsion. In that case, the tendon has pulled off of bone. On the other hand, if there is acute muscular tearing pain followed by bruising and a palpable defect in the muscle, this typically signifies an intermuscular tear. Injuries that do not adequately heal or get adequate therapy can result in scar tissue which is prone to reinjure.  Hamstring injuries have a very high rate of recurrence as a result.

The hamstring muscles in the posterior thigh, as well as the quadriceps muscle in the anterior thigh, work in concert during running jumping, acceleration, and deceleration. A muscular balance between these 2 muscles as well as flexibility of both muscles is crucial to preventing injuries. Core muscle development and hip muscle strengthening can also help prevent hamstring injuries. Hamstring injuries more commonly occur during eccentric contraction. Eccentric contraction means the muscle is firing but at the same time it is lengthening. During running the quadriceps extends the knee as your foot reaches forward near the end of that extension the hamstring slows down the extension while the foot is still moving forward just before impact. This is an eccentric contraction of the hamstring and this is the phase of running most commonly associated with hamstring injuries. These are typically intermuscular injuries. These commonly lead to bleeding into the muscle and then the development of scar tissue in the muscle which is less flexible than muscle, and more vulnerable to tearing in the future. As a result, an athlete with a hamstring injury has a 25% rate of recurrence of hamstring injury in the following season despite rehabilitation.

Once a hamstring injury occurs it is very important to establish whether or not the tendon has pulled off bone or if it is an intermuscular injury. If the tendon has pulled off bone it is important to repair it in the early period after injury. On the other hand, most intermuscular injuries require rest, elevation, icing, compression (RICE) and then range of motion with deep massage. There have been a few studies to suggest that injection of platelet rich plasma with growth factors can enhance healing.  And some other studies suggested injection of steroids may decrease the likelihood of developing scar tissue. The time to recovery is largely dependent on the location and extent of injury. Most minor hamstring injuries can be treated with physical therapy and return to sport in approximately 6-12 weeks. It is very important to regain full flexibility and equal strength before returning to competitive sports to prevent future recurrent injuries.