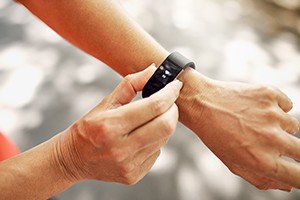 To conduct this study, 163 people undergoing primary total knee arthroplasty or total hip arthroplasty were randomized into two groups. Subjects in the study received an activity tracker with the step display obscured two weeks before surgery and completed patient-reported outcome measures. On the day after surgery, participants were randomized into either the “feedback group” or the “no feedback group”. The feedback group was able to view their daily step count and was given a daily step goal. Those in the no feedback group wore the device with the display obscured for two weeks after surgery and did not receive a formal step goal, but were also able to see their daily step count after those two weeks were up.

Average steps taken by both groups were monitored at one, two, and six weeks, and again at six months. At six months after surgery, subjects repeated their patient-reported outcome measures.

With mobility and physical activity being imperative to healthy aging and very helpful for recovery after total hip arthroplasty or total knee arthroplasty, incorporating an activity monitor into your post-operative rehabilitation is a great idea for health and exercise motivation.